Let’s Get Two Puppies: The Curse of Littermate Syndrome 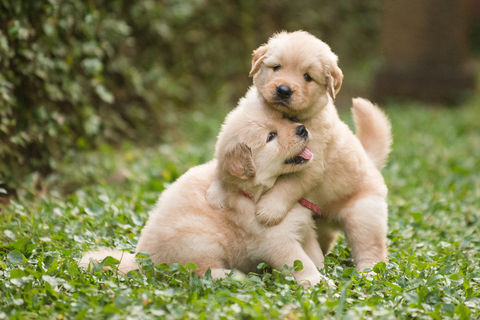 Within the canine community we have our single dog people, who only ever want one dog at a time no matter what, and we have our multi-dog people…I don’t think the latter requires an explanation. Some of us like having a pack around. An important thing to keep in mind, for those us who have pooches a plenty, is not to fall into the trap of getting more than one puppy at a time.

But they’re so cute!Well, here’s the thing, double the puppy is double the work. This includes socialization, potty training, basic obedience, and any other issues that can develop along the way as far as behavior. We’re talking two times the fear periods, two times the attitude, and two times the teething. It really does become a hassle. Even professional trainers and handlers with years of experience are cautious taking on two puppies at once. Why? Aside from having double the duty, you run the risk of littermate syndrome. Everything that you thought you were going to get to do with your dynamic duo in tandem, will actually need to be done separately to prevent this issue as they are growing and learning to become confident independent dogs.

What is littermate syndrome?When otherwise workable puppies develop and unhealthy reliance or attachment to one another. They’re generally inseparable. A confident puppy can become dreadfully nervous or anxious when its counterpart is not around. Littermate syndrome doesn’t need to occur in two pups from the same litter. It can be easily exhibited in two puppies that are around the same age that are housed together and going through the same experiences with one another. Sometimes littermate syndrome can produce fighting if you have two of the same gender from the same litter. Dogs, just like people, go through maturation. Imagine raging hormones in two teenage brothers, except these two have one heck of a bite and very sharp teeth. So, along with needing to work everything in twos, you need to actively avoid your dogs creating this toxic bond between one another. It also makes it much more difficult for the dog to bond with you when it’s much easier to bond with his bestie who is the exact same species. No language barrier or following confusing rules…I wonder who I’d rather spend time with.

When adding new canine house mate, keep these things in mind. If you like having multiple dogs, space out the ages between your dogs. Generally at least 1-2 years in age difference allows you to have enough of a gap that the dogs won’t become overly attached to one another. Also, it gives you ample time to focus on the developing dog and their specific needs without having to juggle it double time. Also, you have formed an adequate bond with all of your dogs and they can still learn to be amicable house mates with one another.

Your request is being sent …